Join us at iX Symposium 2018 hosted by the Society for Arts and Technology, SAT, in Montreal, Canada, where three Swiss projects will be showcased from May 29 until June 2, 2018. See full program here.

The Immersion Experience symposium is “an initiative of Montreal’s Society for Arts and Technology (SAT). Every year, iX welcomes artists, designers, researchers, developers, producers and all those who are curious and passionate about immersive experiences !”

The theme this year is The Conquest of Reality and will address ” the « Reality Race » that is picking up speed with the growing successes of the VR platforms, the commitment of tech giants behind XR authoring and delivery workflows and the expansion of the fulldome network”. Disorder features a dancer in the center of the dome taking the position of a player in a third person video game. Through the experience, the public travels to the heart of the dancer’s memory, which is materialized live through 3D scans. The dancer then takes full control of the 360 environment and becomes the conductor of their own audiovisual space.
The performance will take place on Wed May 30th at 7:00 pm. Info and tickets here. 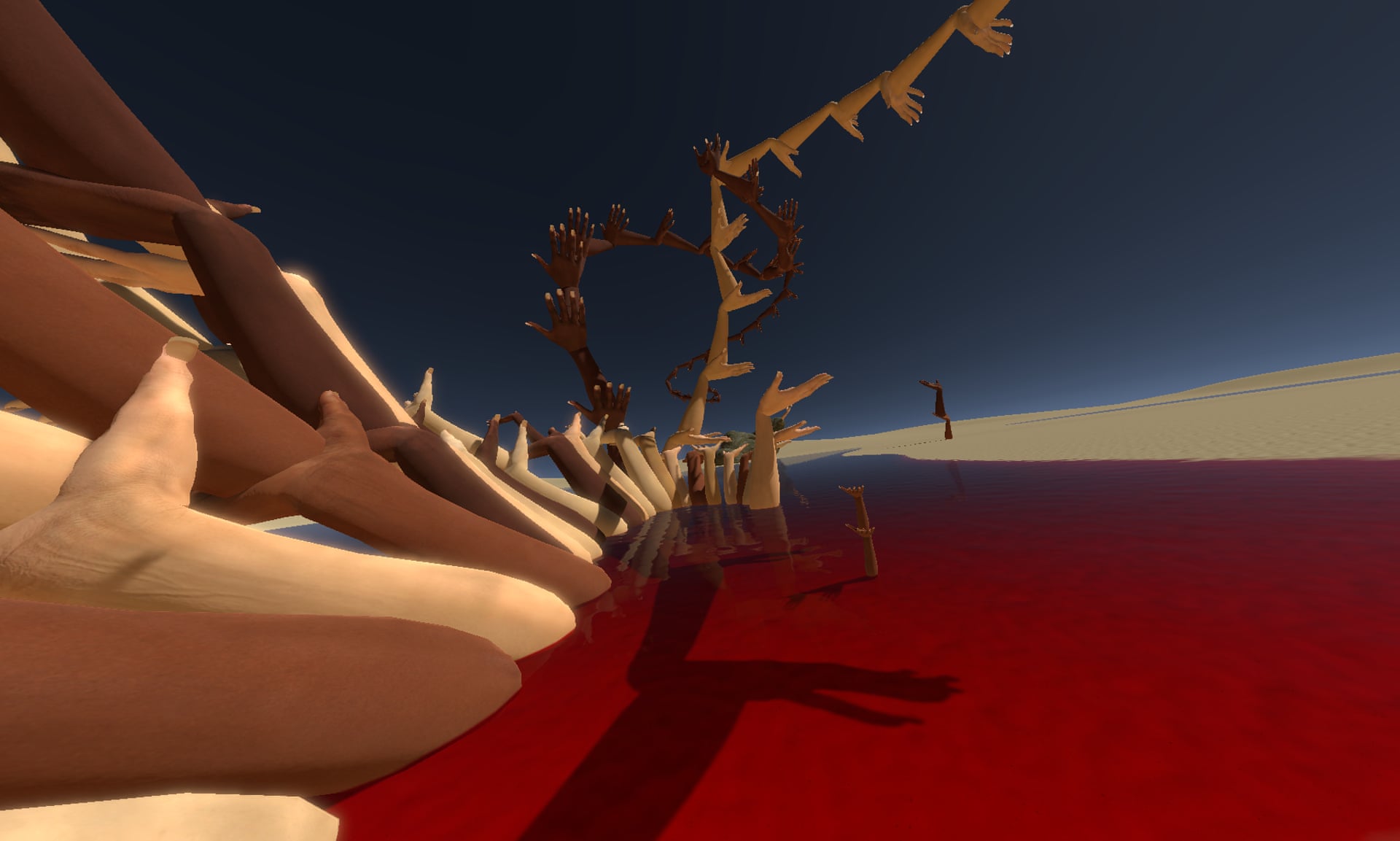 Hanahana, a virtual reality piece, as part of the «AR/VR iX path», by Melodie Mousset

HanaHana is an artistic VR experience by contemporary artist Mélodie Mousset. The first prototype finished in 2017 received critical success and awards. In HanaHana you are the creative life force within a surreal VR sandbox. You can sprout hands, grow chains of hands and construct anything you can imagine from this root component. The metaverse is persistent over multiple players and features a multi-user option. The more users create hands the more the world generates a dynamic life of its own.

The iX path will take place every day from May 29 to June 2. More info here.

Elastic Time, a mixed reality piece, as part of the «AR/VR iX path», by Imverse, with Mark Boulos

Elastic Time a mixed reality piece in which Mark Boulos, American artist, collaborated with Imverse, an EPFL spin off developing software and providing services for photorealistic Mixed Reality content creation. Boulos will give a workshop titled “Body modelisation in virtual spaces: How do I look? How does it sound?”, and will participate in the panel discussion «Self-sovereign identity, Embodied cognition, social change: where are we?» moderated by Kent Bye. Lastly, a preview of Elastic Time will be shown in video during the iX symposium.

During the month of May,  SAT also hosted two Swiss artists’ collectives and showcased their new commissioned work.

NOVA LANDS G1-203 H by Studio Z1 (Camille de Dieu & Laurent Novac) is an immersive audiovisual performance where the space of the dome is revealed while entering the 360° expedition, allowing a gradual reconstruction of the history of the piece. Material, sound, light, and form interact in an organic manner but disruptive elements change the course of the experiment until a total immersion of the viewer under the arch of the Satosphere, the geodesic dome at SAT.

DISORDER (François Moncarey, Kevin Ramseier, and Thomas Köppel) features a dancer in the center of the dome taking the position of a player in a third person video game. Through the experience, the public travels to the heart of the dancer’s memory, which is materialized live through 3D scans. The dancer then takes full control of the 360 environment and becomes the conductor of their own audiovisual space.

François Moncarey
A multidisciplinary artist by nature, François connects science and art in his aesthetic and practice. His fascination with physical phenomena led him to work around a series of light installations. The public is often at the heart of his work, confronted with an active exploration of devices with both tangible and virtual dimensions.

Thomas Köppel
After several years working as a draftsman, Thomas enrolled at the Geneva University of Art and Design and received his Bachelor’s degree in visual arts. He then began studying physics and while continuing his artistic activity. Between 2009 and 2011, he worked with the collective performance californium 248. In 2013, he created the set design for the play 7 minutes of terror by Yan Duyvendak and collaborated with artist Caroline Bergval and musician Ingar Zach in Drift. In 2015, he collaborated on the project GeKiPe at Geneva University of Music and the research institute IRCAM in Paris.

Kevin Ramseier
Kevin lives and works in Geneva. He is the Co-founder of Centre d’Expression Numerique et Corporelle (CENC). Together with François Moncarey, he developed and performed various dance and video projects as well as sound installation. Today, he explores the world of performance, with his project Bambi. Kevin also worked as an organizer and programmer in the DAF festival, Cheyenne Festival, and Xi festival.

Mark Boulos
Mark is a filmmaker and artist working across documentary film, photography, video art, interactive installations, and virtual reality. He is Assistant Professor of Film at Virginia Commonwealth University School of the Arts (VCU Arts) in Richmond, Virginia, USA. His first artist monograph was published in 2017 Hatje Cantz, Germany. In 2015, he received the Rome Prize Fellowship at the American Academy in Rome.

Imverse
Imverse is a spin-off from EPFL developing software and providing services for photorealistic Mixed Reality content creation. Their volumetric solutions reduce the time and money spent on production phases of VR movies and Hollywood movies by a factor of 10. This is possible thanks to their proprietary voxel-based rendering and simulation graphics engine, and our easy and fast process to transform a single 360-degree 2D picture, from any commercial camera, into a 3D room-scale experience with live hologram actors and real-time VFX.